In Port and at Sea: NAVSUP Fleet Logistics Center Yokosuka Supports Navy Ships and Crews. Understanding how that happens can benefit commercial stakeholders, as well.

As the post-Cold War Navy once again faces near-peer competitors at sea, it must reposition itself and step up sustainment of ships at home and abroad. While admittedly a goal in logistics is to provide material and services in a stable and predictable fashion, so that operations can proceed unimpeded, that goal sometimes runs counter to the unpredictable nature of military operations. That is especially true now, as the Navy is using the concept “dynamic force employment” to keep potential adversaries off balance.

Formerly known as the U.S. Naval Supply Depot and later the Fleet Industrial Supply Center, the NAVSUP Fleet Logistics Center Yokosuka (FLCY), Japan has an area of responsibility (AOR) in the Indo-Pacific region that covers 52 million sq. miles and is the largest overseas logistic center in the U.S. Navy, second only to Norfolk in terms of volume.

Capt. Frank Nevarez, the commanding officer (CO) of FLC Yokosuka said the FLCs have similar missions, but the scope and magnitude of the functions vary because they have different customers in different parts of the world. “We support Commander U.S. Seventh Fleet, and the forward-deployed Seventh Fleet operational units, including 12 surface combatants plus a carrier in Yokosuka; eight ships at Sasebo; and four fast attack submarines and two submarine tenders in Guam. We support the aviation squadrons and the Military Sealift Command (MSC) ships, as well as various shore installations and activities. We provide support in eight nations and 14 locations from Korea to Diego Garcia and over to Singapore, Australia and Hong Kong.”

The FLCY answers to the Navy regional commanders in Japan, Korea, Singapore and the Marianas. “We handle inventory management for the Navy to support our forward deployed naval forces. We support base operations; management of hazardous material; industrial support for maintenance; household good shipments; and contracting support that is not associated with military construction. We also provide the supply function for Naval Facilities Engineering Command (NAVFAC) in the Seventh Fleet AOR,” Nevarez said.

Nevarez’ command employs about 1,200 people across the Indo-Pacific region. The FLCY currently has 33 officers, 270 enlisted personnel and 170 U.S. civil service employees throughout the AOR, and about 716 are local national employees known as master labor contractors.

Leaning Forward
Ships send a logistics requisition message or LOGREQ in advance of any port visit, or for delivery at sea  “If it’s food, we work with DLA Troop Support; if it’s fuel, we coordinate with DLA Energy; and if it’s parts, we work with our folks. In the case of an underway replenishment, we would schedule a T-AO or T-AKE to load out in a port like Sasebo, which is a major loading hub for Military Sealift Command (MSC) replenishment ships, and deliver everything to the warships at sea.”

FLC has deployable Contracting Officers and Logistics Support Representatives (LSR) to provide boots-on-ground logistics assistance for austere ports and exercise support. “Our LSRs work with the ships, the schedulers, base operations, base supply officers, and coordinate the movement of material to the ships,” Nevarez said. “Our fleet freight router will determine where a ship can pull in to get resupplied, or where they can be staged for replenishment at sea from one of the MSC Combat Logistic Force ships.”

When parts fail, systems can operate with reduced effectiveness, or not work at all. Ships submit casualty reports (CASREPs) when gear breaks or is degraded, and include what parts are needed to rectify the situation. Parts requisitions to correct CASREPs are given high priority and are tracked very closely. “CASREPs can limit a ship’s ability to conduct its mission, so the parts are expedited and micromanaged,” Nevarez said.

He said the FLCY teams help coordinate parts movements. “If something is coming into a commercial airport and then flown out to a ship at sea, it may have to clear customs, or we may have a foreign military agreement to help facilitate the processing and movement of those parts or material for us,” Nevarez said.

The estimated contracting capacity to support all those foreign port ship visits over the next five years could reach $6 billion, not including ships coming into the Navy ports. “We do approximately 700 port calls a year, supporting 160 ships, 185 aircraft and nine submarines,” he said.

While it may seem straightforward, Nevarez said it can sometimes be a challenge to fully understand the requirement from the end user, whether it’s a ship or aviation squadron. Support is often provided through contracts. In dealing with local vendors and ship Husbanding Service Providers (HSP), there can sometimes be cultural and language barriers. Having a Contracting Officer on site provides attention and oversight and ensures contract actions are appropriate and legal, especially in light of the integrity issues that arose following the Glenn Defense Marine Asia affair back in 2013.

The HSP contractors have already been vetted and approved and can bid to support individual port calls, providing liberty launchers, fuel, trash removal, pumping out chemical holding tanks and oily wastewater in the bilges, and delivering a myriad of other services. And the process allows new companies to get certified. “No longer will you have the same company providing husbanding support services all the time,” said Nevarez. “It opens up competition.”

Payment functions have been passed from the individual ships to Commander, U.S. Pacific Fleet to manage. LOGREQs have been standardized so ships don’t ask for something they don’t need or shouldn’t have, and to remove the ship’s supply officer from the financial transaction. “If you’re an aircraft carrier, this is what you’re going to get; and if you’re a guided missile destroyer, this is what you’re going to get,” said Nevarez. “It’s more of a ‘push’ than a ‘pull.’”

Fuel for the Fleet
To provide the fuel to power the military, the Navy and the other services are responsible for maintaining and operating their own infrastructure, while Defense Logistics Agency (DLA) Energy procures and owns the fuel. “We own – or in some cases contract for – the tanks, trucks and barges, and we manage the daily moving of fuel to our customers.”
Within the Seventh Fleet AOR, Indo-Pacific region FLC Yokosuka manages nine Defense Fuel Supply Points; eight deep draft terminals; and two supported airfields. Fuel can be delivered to ports and bases by pipeline or truck, or in the case of Yokota, by train.

From strategic to tactical, DLA and FLCY work together. Nevarez said DLA handles the “strategic” by replenishing tanks, while FLCY takes on the “tactical” by coordinating with the base, ships, barge contractors, port operations, and environmental for delivering the fuel and ensuring proper fuel samples are analyzed for quality control.

Within the Navy logistics enterprise, operations are accomplished with GOGO, or government owned/government operated), GOCO (government owned/contractor operated) or COCO contracts. For example, fuel delivery in Diego Garcia is a GOCO operation, with a contractor delivering the government fuel. In Singapore or the Philippines, DLA has a COCO existing contract with vendors who supply their fuel.

DLA Energy buys fuel on the open market. Nearly half of the Navy’s fuel is managed by FLC Yokosuka in the Indo-Pacific region; 33 percent of all of the Navy’s fuel, and 10 percent of DoD’s fuel, is located in the Seventh Fleet AOR. Nevarez’ team also supports some Army and Air Force installations in the theater. “Fuel is a very important function that we perform here at FLC Yokosuka,” he said.

Aircraft refueling at a DoD or non-DoD military or commercial facility can use the DLA Energy AIR (Aviation Intoplane Reimbursement) Card to purchase fuel, pay landing fees and arrange for de-icing and other ground services with pre-approved suppliers. Ships can get fuel using the DLA Energy SEA (Ships’ Bunkers Easy Acquisition) Card using an online platform. Smaller craft can purchase fuel at locations such as marinas with the Swipe SEA Card.

Mail Call
Mail is another important supply function. The Navy no longer has the Postal Clerk rating. Today mail is handled by enlisted Logistics Specialists. In the Indo-Pacific region, the Navy handles all mail transportation for the military services, as well as embassies and consulates. FLC Yokosuka manages 13 postal activities and base post offices on Navy installations, in five different regions, while the other services run the local post offices on their respective bases.

Mail delivery is still a much anticipated event on ships.  Even though the Internet has replaced a lot of the “snail mail,” cards and letters, today Sailors are ordering a lot of items online, so the volume of mail is growing exponentially.  Nevarez said 22 million pounds of mail is processed a year by the Fleet Mail Center in Yokohama, which is the main hub for FLCY, much of it being packages from Amazon.  “We support approximately 180,000 customers and have $5 million in postal revenue annually,” he said.

But even if there wasn’t an operation, exercise or contingency to respond to, Nevarez and his team are always busy. The FLCY is in the process of doing a 100 percent inventory of all its 49,000-plus line items, valued at $614 million. They maintain the Inventory database of buildings, structures vehicles and other real property, and there are regular audits and inspections, as well as visits by the Navy Food Management Team and Fleet Assist Team to the various commands and activities.

In addition, FLCY supports Ships Stores, which provide items for sale on board ships, such as snacks, drinks, apparel and electronics, and contribute to the command welfare and recreation funds. Nevarez said there is always something challenging to look forward to at FLCY, such as managing the homeport swap involving with USS America (LHA-6) and USS New Orleans (LPD-18) replacing USS Wasp (LHD-1) at Sasebo, or preparing to bring the littoral combat ship and 2,000 new line items to Singapore.

With the constant personnel turnover, there are always lots of household goods (HHG) shipments coming and going. FLC Yokosuka manages more than 12,000 HHG shipments throughout the region, with a large number of those taking place during the summer months as families rotate between school years.

Nevarez says his team pays close attention to safety, security, fiscal responsibility and environmental stewardship throughout the FLC Yokosuka enterprise, which requires regular involvement of the CO all the way down to the deck plate level.

One part of his job that he finds gratifying is the bilateral relationship the US Navy shares with its host nation counterparts in the Japanese Maritime Self-Defense Force. “We do a lot of relationship building here in Japan. Because we all work together in this busy AOR, we do a lot to help each other.” It turns out that in the military, relationships in the supply are every bit as important as those in the commercial sector. Here, there is arguably more riding on the final outcome.

This article first appeared in the MAY/JUNE edition of Maritime Logistics Professionalmagazine. 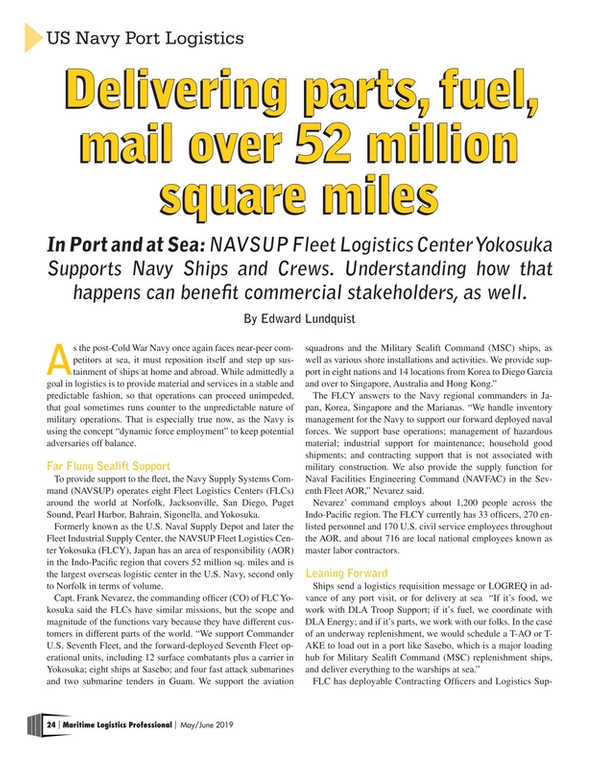 Other stories from May/Jun 2019 issue